Sip some delicious wine and watch some of the best movies of all languages!

Thanks for your interest!

Click on the movie poster to watch the trailer.

Our choice for the January French movie is Goupi mains rouges by Jacques Becker. 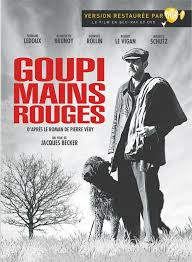 We will start 2022 with a delightful French acidic comedy, GOUPI MAINS ROUGES (1943), directed by Jacques Becker (who also did the wonderful Casque d’Or ).

A medley of crime, love, deceit mixed with an ambiguously satirical look at society represented by a rural family and a would-be Parisian upstart. Funny and moving at the same time and driven by scintillating dialogues.  Guaranteed to lift your spirits!
Suitable for adults over 15.
1h45. –  English subtitled –
Friday, January 22nd - Zama (2017)

ZAMA by Argentinian Director Lucrecia Martel explores life in a remote colonial outpost of Paraguay where a Spanish official pines away trying to get himself transferred to the capital Asunción.
When his petitions are repeatedly rejected by an officious superior, he embarks on a fatal enterprise.
This film is a departure from Lucrecia Martel’s usual themes of ennui and deleterious behaviour within Argentine’s bourgeois society but does however analyse a similarly pointless and corrosive atmosphere among the Spanish colonists.
An enigmatic and profound meditation on what constitutes the human meaning of life. Beautifully photographed and performed.
Suitable for adults over 15 –
English subtitled –  1h55

Our choice for the February French movie is Divines by Houda Benyamina. 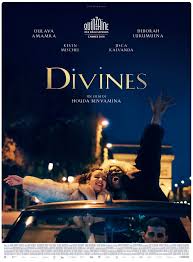 DIVINES,  by director Houda Benyamina is a movie bursting with electric energy: the film follows the adventures of a group of young girls living on the edge in a Paris « banlieue ». A searing portrayal of a generation left to itself to survive, a study of identity, despair and recklessness.
Filmed with a mixture of anger and compassion by the director who won the Camera d’Or at Cannes and Best Film at the 42nd Cesar Awards for this, her first and promising feature film.
Suitable for adults over 15.
1h45. –  English subtitled –
Friday, February 19th - Sharasojyu (2003) 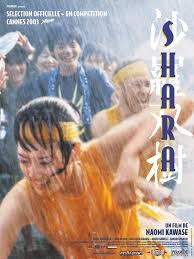 SHARASOJYU (Shara) a wonderful 2003 movie by Naomi Kawase in which a  family has to deal with the sudden disappearance of their young boy in Nara (the director’s birth place and where she shot most of her films). Most of Kawase’s movies deal with the unstated tensions and undercurrent fluctuations in human relationships and this one is in the same vein.
Shara is lyrical, even-paced, elegantly photographed and contains one of the most exhilarating sequences I have ever watched: simply what cinema is all about.
Suitable for adults over 15
1h40 – english subtitled
Book a seat

Thanks for your interest!